Colorless Tsukuru Tazaki and His Year of Pilgrimage - Haruki Murakami

Having discovered Murakami in a roundabout sort of way by happening on the third volume of his magnum opus 1Q84, I was naturally keen to try more.  Tsukuru Tazaki is a more recent (2013), much shorter work. It is equally good. 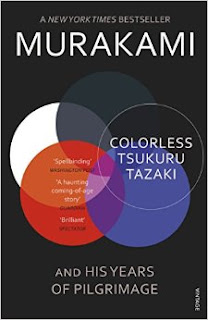 The story is this: Tsukuru and four other high school students do voluntary work one summer and become the closest of friends for the rest of their secondary education.  The four others, two boys and two girls, happen to have references to colour in their names, hence the 'color' part of the book's title. Tsukuru doesn't; his name means 'builder of things'. As such, he has to go to university in Tokyo because only Tokyo offers a course in his specialism, the building of railway stations.  He comes home for the vacations and, to begin with, everything as it was before he left. His friends are delighted to see him, desperate to hear news of the big city.  But then, for reasons unknown, they cut him dead. They refuse to take his phone calls. When one does finally speak to Tsukuru it is only to tell him that they have all agreed they want nothing more to do with him.

For five months thereafter Tsukuru thinks only of dying.  His life, without his friends, has thus become 'colorless'.  He recovers, graduates, gets the job of his dreams and stays in Tokyo. Sixteen years later he starts dating a woman whom he can at last envisage a future with. She tells him he seems blocked by what happened with his friends.  She convinces him that they only have a future together if he can relieve himself of the burden of his past.  With her help, he tracks down his friends. One of the girls, Shiro, has been murdered.  The other lives with her husband in Finland.  The two boys, Aka and Ao, are still in their home city.

Tsukuru visits them all, even making the trip to Finland to track down Kuru.  They are all pleased to see him.  They all regret having cut him off like they did.  But what else could they do when Shiro told them what Tsukuru had done?  Naturally, I'm not going to reveal what that was.  The important thing is the way Murakami handles the revelation.  Did Tsukuru do it?  Did he later go back and murder Shiro.  If he didn't do either, who did?  And the beauty - the mastery - of his technique is that we never find out.  It's four or five days since I finished the book and the questions are still rattling round in my head.  High art - downright brilliant.
Posted by rogerwood at 17:04