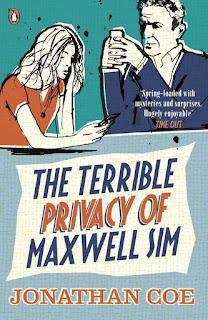 I like Jonathan Coe, I like his irreverence, his depth of knowledge, his wit, though all these can, of course, become pitfalls. I like him best when he combines natural satire with compassionate characterisation.

The Terrible Privacy of Maxwell Sim falls midway in his range.  The story is slightly too convoluted, the titular protagonist just a shade too bland to evoke much empathy.  The writing, however, is a joy, and the ending just brilliant. But the fact remains, the journey of personal discovery just isn't that interesting.  I'm not surprised Max's wife left him, nor that his father doesn't like him that much.  Indeed one of the sub-stories - a really clever device, revealing Max as others see him - shows him to be rather a selfish, spiteful piece of work.

Some characters are not given as much time as I would have liked. Poppy's uncle Clive, for example. That said, the risky device of anchoring Max and his journey athwart that of the round-the-world sailing cheat Donald Crowhurst works like a charm. Like Coe, I remember following the Crowhurst story in the Sunday Times as a youngster; it has had more effect on me through Coe's novel than the reality ever did.

An excellent novel, a fine example of its kind - but Coe can do better.