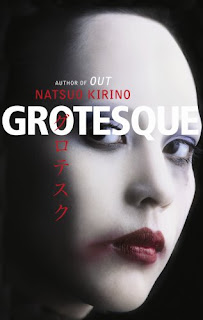 I really am in two minds about this book.  On the one hand I read all 467 pages and never thought about packing it in.  On the other, it never gripped me.  The end neither surprised or disappointed me - yet I can't get Grotesque out of my mind and on balance that has to mean Kirino is doing something right.

The blurb on the back tells us Kirino (a pseudonym) is a leading Japanese crime writer.  This seems to be the case, but Grotesque is not really a crime novel.  Our unnamed principal narrator is neither the victim nor the perpetrator.  She is merely a dispassionate observer of the effect the crime has on others.  This is strange and unsettling, given that she is the sister of one victim and a purported friend of the other.  The strange and unsettling tenor of the book is actually what keeps you reading.

It is no secret who killed the sister, Yuriko, but he flatly denies murdering the second, Kazue.  In Japan, apparently, the defendant is expected to write a pre-trial statement, explaining himself and either justifying his legal arguments.  He - the Chinese illegal immigrant Zhang thus becomes the least reliable of our unreliable narrators.  Both Yuriko and Kazue tell their versions through their journals: Yuriko became a prostitute to monetarise her beauty, Kazue does it as a hobby - she is otherwise a successful professional career-woman.  Both do unspeakable things.  That's the kind of novel this is - even the beautiful blind Yurio, Yuriko's abandoned son, is manipulative and utterly bound up in self-interest.

The fact that none of the characters are in any way likeable is what makes Grotesque as book hard to like.  The title is absolutely correct - everyone here is grotesque in one way or another, indeed less than fully human.  What is it actually about?  Well, I suppose in one aspect it is about the dehumanising effect of modern cross-cultural life, particularly on woman.  It is certainly not about the methods women use to carve out an identity for themselves because everyone here has an identity imposed on them by others.  If I had to plump for a single definition it would have to be 'a novel about perversion in the widest sense - social, cultural, psychological.'