Before this, the only Conrad I'd read was The Secret Agent, interesting enough but not dazzling. I knew Heart of Darkness's reputation but, despite being the basis for Apocalypse Now, I had not been attracted. Big mistake, it turns out. 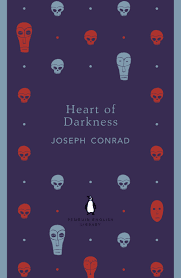 First off, it's a novella, only three chapters long, which enables Conrad to create and sustain an oppressively dark atmosphere.  Even though the key action all takes place on the River Congo, everything is dark, primeval, threatening.  Marlow becomes obsessed by Kurtz because everyone he comes across speaks of him like a god.  Long before they find Kurtz's station they hear he is ill, that he may even have died.  Then they find him, defeated and dying, kept going only by his fascination with this antediluvian wilderness.

It's amazing to think that English wasn't even Conrad's second language.  Even when he first decided to become a novelist he wanted to be a French one.  Certainly the shorter French form has paid off brilliantly in Heart of Darkness - so much of the descriptive prose teeters on the edge of Symbolism, the key movement in French literature of the Belle Epoch.  French dialogue is differently punctuated and might have been easier for Conrad than the English, given we have Marlow telling his cronies in the Port of London his first-person account of the quest for Kurtz, including the tales told by the ex-pats he encounters along the way and, of course, Kurtz himself.  Everything is allusive in this tightly contained world.  Nothing is certain.  Kurtz is a character like no other I can think of - seedy, broken, twisted, perhaps even deranged, but still charismatic, above and beyond pity or compassion, utterly compulsive. Harking back to Apocalypse Now, no wonder they had to fly in Marlon Brando to play him.

God, it's a staggering achievement. Conrad, of course, writes from the heart. He had been to the Congo as a young sailor.  It affected him so profoundly that he tried to shoot himself through the heart.  It is why he gave up the sea and took to writing.  From such suffering comes art of the highest order.