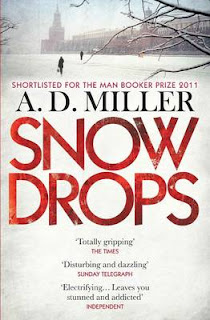 That's what happens when your publisher lets you down with a stereotypical cover.  I mean to say, doesn't it look like every one of Philip Kerr's Gunther novels?  And focusing on the 'snowdrops' - bodies that pop up in the spring thaw - doesn't help, especially when there is only one of them in book, a character we have never encountered and whose only purpose is to be discovered when winter ends.

In fact, Snowdrops is a serious novel about corruption in post-Yeltsin Russia, where of course more or less everyone is corrupt.  It is a world Miller knows inside out, having been a journalist there between 2004 and 2007.  His hero Nick is an ex-pat lawyer, and therefore a corruption magnet.  His firm is blithely working on some complex sub-Abramovitch oil deal when Nick falls head over heels for young Masha, a woman fifteen or more years younger than him.  Through Masha he meets Katya, the sister-who-isn't, and Tatiana Vladimorovna, the aunt-who-isn't.  The affair starts with the first chill of winter and ends with the thaw when Nick's suspension of disbelief washes away with the snow and he realises how low he has sunk, how willingly he has been corrupted.

It's an important novel, then, which certainly deserved its nomination. 2011, in case you're wondering, was the year Julian Barnes won the Booker with The Sense of an Ending.  Miller is a serious and talented novelist, albeit he doesn't seem to have followed up on Snowdrops.  If and when he does, I'll be reading him.
Posted by rogerwood at 17:19