For those of a certain generation (mine) Gerald Seymour was a familiar face, reporting for ITN from the world's troublespots.  Then in 1975 he published Harry's Game, which was a game-changer in itself.  It was a tremendous hit, the first thriller to really engage with the Northern Irish Troubles, which were then only five or six years old.  Seymour immediately gave up TV for writing and is still turning out high-quality, serious thrillers today.  The 'serious' tag is what has always set him apart from the more lightweight practitioners.  Seymour knows what he is talking about and, if he doesn't, you know that he has the skillset to find out. 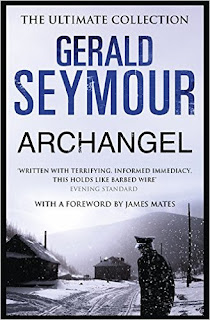 Archangel is from 1982, when the USSR was still the Evil Empire.  Michael Holly is a British businessman of Ukrainian extraction.  He has genuine business interests in Russia but stumbles, as so many did in those days, into agreeing to deliver a message on behalf of MI6.  He is caught as they always were and sentenced to fourteen years - not a problem in itself, for there were longstanding ways of dealing with such regular embarrassments.  A swap is set up for a Russian agent in Wormwood Scrubs - everybody's happy, it's business as usual. But the Russian suffers a heart attack and dies.  The deal is off.  Holly can forget the comparatively cushy prison life of a trading asset, he's off the back of beyond, the Correctional Labour Camps of Mordovia.

This is where Seymour really comes into his own.  Holly can speak Russian thanks to his exiled parents.  Everyone else in the camps is Russian or from one of the subject Soviet states.  Seymour humanises them all, even the ambitious KGB captain and the useless camp commander who is counting down the days to retirement.

Meanwhile MI6 is checking Holly out back in Britain.  Will he be able to survive?  Will he give in to torture or blandishments and embarrass the secretive element of HM's government? Meanwhile Captain Rudakov offers a deal: all Holly has to do is admit the espionage and he will be on the next plane home.

In many ways the story boils down to a battle of wills between Holly and Rudakov, which Seymour handles expertly.  It's not giving too much away to say that Holly outstrips expectations.  We think we can guess the outcome because of the way Seymour sets up the narrative. But can we?  Can we really?  Holly might be suffering reality in its harshest form, but at the British end we are in the world of smoke and mirrors.

It must be thirty years since I last read Seymour.  I had forgotten how good he is.  Thankfully Hodder have issued this "Ultimate Collection" so I can catch up.
Posted by rogerwood at 17:22