Jim Ballard was born in Shanghai and interned by the Japanese from 1942 to 1945.  The pubescent hero of Empire of the Sun is also called Jim, also born in the English enclave in China, also interned.  It would be wrong, though, to confuse the two.  Empire of the Sun is only autobiographical in its setting and background.  The real Ballard was interned with his parents, the fictional Jim isn't.  He spends the Japanese occupation alone, initially trying to be reunited with his parents, later afraid of the reunion.  Empire of the Sun is therefore what might have happened to Ballard had he been separated from his parents, based on the occasional adventures he had as a child cycling round Shanghai on his own. 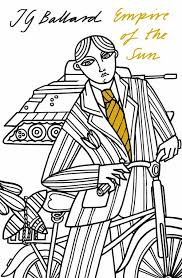 It is a classic of war literature and effectively unique - I know of no other coming of age story set in a Japanese prison camp in China.  Indeed the brutal Sino-Japanese war is scarcely mentioned in postwar western literature and for most, I suspect, the Rape of Nanking is thought of as a single personal sexual attack.  It startles us that Jim, China-born and never having lived elsewhere, harbours hopes of a Japanese victory.  It startles and engages us.

Ballard's problem in his speculative fiction is often the inability to explore character amid the high concept of his idea.  That is in no sense a problem here.  Jim takes us with him on the journey.  We understand the disturbing things he feels compelled to do, the often wrong decisions he makes based on the limited information available to him, the ghastly friends he makes in order to survive.  Paramount among the latter is the appalling Basie, American cabin steward, thief, and corrupter. He is a monster equal in my mind to Fagin or Mr Hyde.  His use of lady's talcum powder is a signature as chilling as Ernst Blofeld stroking his white Persian cat.

I have seen Spielberg's film and cannot remember a moment of it.  It is dull and worthy, like so much later Spielberg.  It will be a long time before I forget the original novel.  It is a work of genius. I recommend the Harper Perennial edition because of the excellent extra material at the end, a practice I usually deplore.
Posted by rogerwood at 17:21