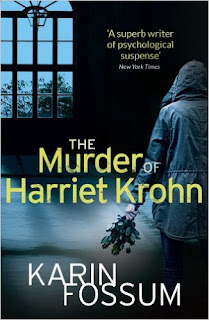 There is a trope in Scandinavian noir in which the protagonist appears rarely.  The later works of Hakan Nesser are almost entirely devoid of Inspector Van Veeteren.  Indridason also manages most of his translated Inspector Erlendur and Sigurdur Oli series with very little Erlendur and no Oli whatsoever.

This, it seemed, was going to be the case with The Murder of Harriet Krohn.  Her series investigator, Inspector Konrad Sejer, doesn't appear in person (he is mentioned in the press early on) until page 187.  He then disappears again for a couple of chapters.  I thought that was it.  But I was wrong.  Fossum is by some distance the finest writer of all the Scandi noir lead players, a Norwegian Barbara Vine if you will.  Her interest is the evil that good men do, not simply the restoration of balance through justice.  Here, her interest is the wretched Charlo, who kills to try and break out of the wretched spiral of his life.  He knows perfectly well that he has done wrong.  He is fully conscious that he has a moral debt to pay.  He tries to put his life back together, to become again the good person he once was.  He re-establishes contact with his estranged teenage daughter.  He finds an interest they can share and love together.  He takes on menial labouring work to try and exorcise his guilt.  He even visits the grave of his victim, not to gloat or weep but to try and understand what happened between them.

Fossum goes to great lengths to make us empathise with Charlo, even giving him a crippling disease.  Thus when Sejer finally gets into his stride and questions Charlo our sympathies are equally divided between two fundamentally good men.  This sequence, lasting thirty pages or so, is a magnificent piece of writing, an object lesson on how these things should be done.  There is no trickery, no slight of hand, just diligent, effective questioning from Sejer and Charlo calculating how close he can stick to the truth without confronting the ultimate truth of what he has done.

I was reminded of Crime and Punishment - so strong were the resonances, I cannot believe Fossum did not seed the prompts deliberately.

I've said it before, but I wish she was better published.  Vintage is a great publisher, I look out for Vintage publications - so why is this cover, like all Fossum covers, so feeble?  And why that pathetic font?  Surely the way the author's name is done would sit more comfortably on a children's book.
Posted by rogerwood at 17:30