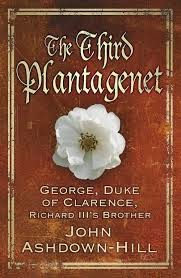 John Ashdown-Hill was the genealogist-historian who tracked down people descended from Richard III's female relatives though not, of course, from Richard himself.  This meant the DNA in the skeleton dug up in the car park of Leicester Social Services could be matched, confirming the remains of the crooked-back man killed in battle, always said in the historical records to have been buried where he was found, was indeed the missing king.

The dig was funded by the Ricardians, of whom Ashdown-Hill is one, who were appalled when the 'Tudor propaganda' deformity was there before their very eyes.  The implication, of course, is that everything else Thomas More said about Richard might also be true, in particular that he murdered his nephews, the Princes in the Tower - just like every contemporary chronicler, including those who wrote before 1485, said he did.

The Ricardians, quite openly, have an agenda - to restore the king's reputation.  This can lead them into odd yet fascinating digressions, which is what interested me about Ashdown-Hill's latest book.  His thesis is that the Duke of Clarence, the surviving brother between Edward IV and Richard, was not the scheming, self-promoting, untrustworthy blot on the landscape who screams out at us from the pages of history (and I'm talking here to real history; that recorded at the time).  Thus, for Ashdown-Hill every Plantagenet male other than Clarence and Richard was illegitimate and excluded from the crown.  I'm no fan of the British royal family and their endless progeny but I know for a fact some of them were married - I've seen them marry on the telly.

His other problem is that Clarence has left very few traces behind him (though, to be fair, he has an awful lot of actual direct descendants thanks to his daughter Margaret Countess of Salisbury).  Even his bones seem to have vanished from his tomb.  Thus everything has to be reconstructed or hypothesized.  The result is great fun in every sense.  Ashdown-Hill provokes argument, which is what books should do from time to time.  I don't agree with some of his theories (frankly, I don't agree with any of them) but I am confident that what he identifies as facts are indeed reliable.  I enjoyed it, and there are plenty of other modern histories of the period I can't say the same about.
Posted by rogerwood at 12:56