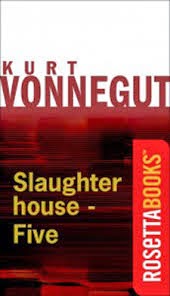 I know, I know, everyone else on the planet has read this 20th century classic before me, but at least I made it in the end.  The story is well known.  Hopeless loser Billy Pilgrim gets captured by the Germans in the dying days of World War II and survives the bombing of Dresden (the British equivalent of the US bombing of Hiroshima) in February 1945 because he and his work gang happened to be in Slaughterhouse Number Five.  Thus far, Billy is Vonnegut himself, however the we begin with the author and his return to Dresden twenty-five years later, and from time to time the author intrudes by pointing out that it was he, the author, who said that to Billy just now.  So we know from early on that this book is going to be different.

Billy, we are told, at the beginning of Chapter Two, "has come unstuck in time."  This is because he has been abducted by Tralfamadorians, the inverted sink plunger people, who see time as a whole not as a sequence.  So some of the time Billy is on display, naked, in a Tralfamadorian zoo, with the naked porn star, Montana Wildhack, the Tralfamadorians kidnapped for him, and then the next moment he is in Dresden, or the Veteran's Hospital, or in his optometrist office, or in 1976 (nine years after the book was published) when he is a celebrated public speaker on alien abductions about to murdered, as he has always known he will be, by the guy he met on the prisoner of war train back in 1944.

The book's inventiveness never flags.  On one level it is comic, satirical, but Vonnegut never loses track of the central point, the indiscriminate slaughter of civilians and prisoners of war in Dresden.  Throughout the book people keep dying, each passing marked with the dispassionate phrase, "So it goes."  So when he comes to telling us that 135,000 people died in Dresden in a single night "So it goes" knocks the stuffing out of us.