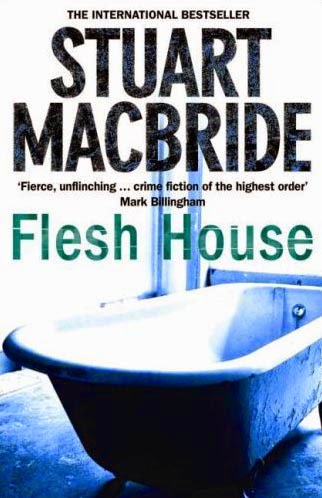 Flesh House, from 2008, is the fourth of the Logan McRae novels, perhaps the most compelling series in contemporary Tartan Noir.  It shares all the regular tropes - horrors from the past, injustice righted, revenge - and features all the regular favourite characters.  It's the novel where MacBride really gets into his stride but you also get the sense that he's developing habits and the occasional shorthand approach to characterisation.  The premise here is great - the serial killer known as the Flesher has returned to butchery after twenty years; so has the man found guilty of the earlier crimes, now freed on bail.  DCI Insch, his blood pressure always about to blow, was on the original investigation.  So was the easy-going Chief Constable of the West Midlands, who pops up to Aberdeen to lend a friendly hand.  Other officers on the case are being targeted.  Who by?  Why?

The weak point for me were the scenes inside the Flesher's holding cell.  MacBride is exploring Stockholm Syndrome here, and there is a key plot point involved, but there were too many visits to the scene and for me it just got tedious.  I started skipping them and it affected my understanding of the plot not at all. I didn't figure out whodunnit, but the twist was too convoluted for me to care too much.  I always feel you need to know your villain - to a much greater extent than we know this villain - in order to get the real visceral shock.  I mean, that's the point of noir, isn't it - the horror of which seemingly hyper-normal human beings are capable of?

As ever, a good, fun read - but not the best of the series so far as I was concerned.
Posted by rogerwood at 11:59