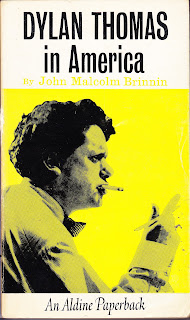 The classic account of the poet's last days, written by the American poet who organised his US reading tours and produced the first live performances of Under Milk Wood a year before British audiences heard it.  It adds adds several layers to the standard impression of the roistering Welsh bard.  For a start it is in no sense hagiographic; even though it was published in the US in 1955, barely a year after Thomas succumbed to alcohol poisoning in New York in November 1953, Brinnin offers a study of a man at war with himself, conflicted between art and self-indulgence, who often behaved appallingly but who was also appallingly treated by those closest to him.  What brings the book startling to life is the realisation that Brinnin has fallen in love with Thomas, hence the enmity of Dylan's legendary wife Caitlin, who is not gently depicted but who nevertheless endorses the book with a foreword.  The final, unflinching account of Dylan's last days, comatose in St Vincent's hopsital whilst Caitlin trashes the waiting room and brawls with nuns in the throes of a drunken mental collapse which soon sees her banned from the hospital and voluntarily committed to a psychiatric hospital, is truly eye-watering.

The book's greatest strength is that Brinnin confines himself solely to what he witnessed or uncovered.  There is no mention of anything before February 1950 when, as the newly-appointed Director of the New York Poetry Centre, Brinnin invited his idol to visit the Big Apple.  What particularly interested me was the alternative account of the creation of Under Milk Wood.  Brinnin encounters the work already part-written but still has to pressure Thomas into making it ready to be read publicly and subsequently acted.  At the same time, of course, though Brinnin knows nothing of it, the BBC was having exactly the same problem.  In a sense Brinnin and America win because they get to see Thomas read his own work and perform it with actors.  Brinnin also tells us that Thomas was still making changes and writing new material until his health finally collapsed.  Thus what Brinnin saw in New York in October 1953 was almost certainly different to what the BBC broadcast in January 1954, neither version was a finished work and neither was entirely what the poet had envisaged.

This classic Aldine paperback from 1956 is a companion piece to the February 1954 Aldine edition of Under Milk Wood on which I have based all my scholarly writing about the work. 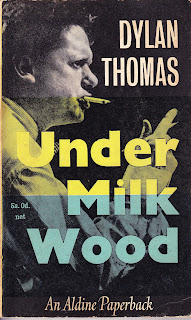 I do this because we can pretty sure this is text that Douglas Cleverdon put together for the BBC production.  (My research has demonstrated that other published texts, even those published after the broadcast, differ significantly from the performed texts.) Others - including Cleverdon - have since re-edited and generally tinkered, usually making it less impactful in my view.  Surely the only text better than this - or, more precisely, closer to Dylan's last view of what it should be - would be the text performed in New York at the end of October 1953.  I wonder if that exists anywhere?

Odd, isn't it, that the publishers only seemed to have the one photo of Dylan?
Posted by rogerwood at 15:18