If the Dead Rise Not - Philip Kerr 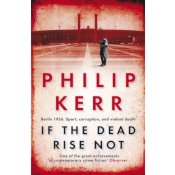 Philip Kerr is on great form with this 2009 Bernie Gunther thriller, the sixth of eight thus far.  Kerr hops back and forth in the Gunther sequence but in this case he encompasses Berlin 1936 and Havana 1954 in one protracted case.  I've never seen anyone attempt it quite as Kerr does.  For quite a while you feel a bit cheated, simply abandoning the 1936 story at a live-or-die moment, but it really pays off when Kerr delivers the knockout twist at the very end.  I certainly didn't see it coming.

Anyway, Bernie is in his hotel detective phase, haunting the corridors of the Adlon Hotel having been purged from KRIPO for not being a Nazi.  It's the year of the Berlin Olympiad and Avery Bundage is in town to approve the Nazi games on behalf of the International Olympic Committee.  There's a fat dead guy in one of the rooms.  Looks like his heart gave out while entertaining a joy girl.  A routine chore for the staff, except that this particular fat guy was a prime bidder for the Olympic stadium contract.  Then there's a circumcized ex-boxer in the canal.  The two can't possibly be linked.  Can they?

Drop-dead gorgeous American writer Noreen Eisner Charalambides visits the Adlon and soon Bernie is ferrying her round town in her quest to unearth the unpalatable truth about the Hitler Olympiad.  A lot of the unpleasantness seems to hover around Chicago entrepreneur Max Reles.  Too much, in fact...

Then we're in Havana, eighteen years later.  Bernie is hiding behind his 'Carlos Hausner' persona (first encountered, by me at least, in A Quiet Flame), Reles is running a hotel and Noreen is staying at Ernest Hemingway's place.

If the Dead Rise Not won the 2009 CWA Ellis Peters Award for historical crime fiction.  And I'm not a bit surprised.  Essential reading for fans of the genre.
Posted by rogerwood at 17:18