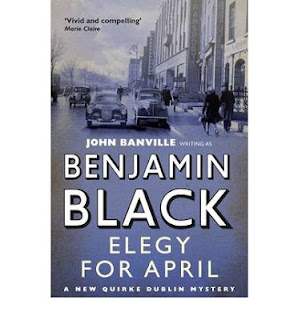 It's no secret - it says it on the cover - 'Benjamin Black' is feted Irish novelist John Banville.  His series character Quirke (no first name, naturally) is an alcoholic Dublin pathologist.  The twist or signature of the Quirke novels is the timeframe - Ireland in the 1950s, depressed, priest-haunted, drink-sodden.  What makes the novels very special indeed is the depth of characterisation so effortlessly rolled out by the author; even walk-ons who exist solely to plant the clues are enlivened and distinguished with little tics and traits.  Take for example decrepit old catwoman Miss Leetch:  "Gradually it became clear, if that was the word, that in the chaotic lumber-room that was Miss StJohn Leetch's understanding, the fellow that April might have gone off with was not one but many."  Classy stuff.

Essentially this a story about disfunctional families - Quirke's own (surprisingly complex for a foundling) and the Latimer family whose daughter is the missing April and whose father was the poster boy for the General Post Office siege of 1916.  The writing is deft but deeply layered, the plotting clever without ever being mechanical.  Not all loose ends are tied up, which increases our involvement.  Who was it spying on Phoebe in her flat?  Maybe we find out in a subsequent book.  I shall certainly be laying hands on another Quirke a.s.a.p.

Black has a great website.  The big news, apparently, is that Quirke is the BBC's next big literary detective.  Gabriel Byrne plays our hero.  Could be great - Byrne in Usual Suspects or Miller's Crossing form - or it could be eyewateringly dull like that psychiatrist thing he did for subscription TV.  I'll have read the books by the time it airs, anyway.  I strongly suspect I shall also be trying one of Banville's 'straight' novels.
Posted by rogerwood at 17:18