Hour of the Wolf - Hakan Nesser 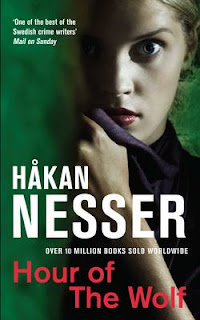 Another of Nesser's police procedurals set somewhere reminiscent of Holland.  This time things get as personal as they possibly can be for retired Chief Inspector Van Veeteren, so it is not such a credulity stretch when he gets involved in the investigation(s).

Nesser is always readable, always smart and often quietly amusing.  This time, however, he hauls us straight into the emotional consequences of derailed lives colliding.  It would be too easy to give too much away - and plotting is all in Hour of the Wolf.  Nesser himself provides a useful summary on the penultimatum page: "I was a normal human being two months ago."

Several critics have likened Nesser, in this novel, to Ruth Rendell.  There's some merit in the comparison but it doesn't really hold water.  Rendell specialises in the monster hiding among us.  Nesser's villain isn't a monster to start with.  He makes a mistake - a mundane error of judgement that thousands of people make every day - and boy does it go wrong from there.

I don't know if Hour of the Wolf is the best Van Veeteren.  I haven't read them all yet.  It's certainly the best of the post-retirement Van Veeterens.
Posted by rogerwood at 16:15