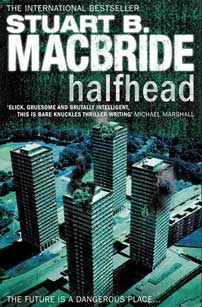 Stuart MacBride writes the Logan McRae 'Granite City' police procedurals.  Stuart B MacBride, which I guess is some sort of homage to Iain M Banks, wrote Halfhead, a near-future crime thriller set in Glasgow.  How near in the future?  Well, perhaps only one more Tory government away.  Violent criminals are half-headed and happily doing all the filthy jobs.  The poor are kept high on virtual reality and stuffed into enormous towerblock complexes like Monstrosity Square.  Order is maintained by Bluecoats, the agents de police, and the hi-tech gendarmerie-cum-CIA of the Network.

The halfheads are more or less lobotomised - all bar one, anyway.  She used to be Dr Fiona Westfield, esteemed clinician and serial killer.  She killed the wife of Assistant Network Director Will Hunter.  Hunter caught her and halfheading resulted.  But now she's remembering.  She's starting to wake up.  She wants the other half of her head back.  She wants to feel the glorious ecstasy of slaughter again.  And she wants to find out what became of her special project, her 'children'.

I'm no sci-fi buff but I'm so glad I picked this one up.  The level of sci-fictionality is just about right - sufficient to justify the technology required but in no sense fanciful.  Basically it's a fairly straightforward killer chase enlivened with three-dimensional characters with real emotions and, of course, the compulsive Dr Westfield.  Filmicly I thought Blade Runner.  Fictionally I was put in mind of Stephen King's Bachman books.

MacBride-without-the-B's latest book is out.  Birthdays for the Dead is another stand-alone novel, contemporary this time and set, at least partially, in Aberdeen, but without McRae and the other regulars.  It's a must-read for me.
Posted by rogerwood at 16:31