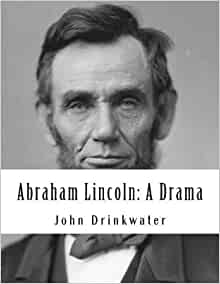 Abraham Lincoln is the play that made John Drinkwater famous on both sides of the Atlantic.  He produced it at Birmingham Repertory Theatre, which he ran, in October 1918.  It then transferred to London and became an enormous hit, even though - as everyone said at the time - it had none of the usual attributes of commercial theatrical success.  There is no love interest, no jokes.  Any real conflict is either offstage or internal until the very last moment.  There are no surprises.  Barely any continuity.  Instead we jump from Lincoln at home, accepting nomination, to the White House a year later,  then two years later, then Appomattox, April 1865, and finally Ford's Theatre, a few evenings later.

What the play had, however, and what the English public desperately wanted to see as the world's worst war finally ended, was a moral hero who justified the bloodshed and pledged reconciliation.  This, of course, is not what Allied politicians ultimately delivered, but it was absolutely what the public wanted.  And it is beautifully done.  Drinkwater was a minor Georgian poet who dabbled in verse drama before he wrote Lincoln.  He was also a man of the theatre.  His father had walked out on a secure teaching job to go on the stage.  Drinkwater himself had been with Barry Jackson, who had founded and built the Birmingham Rep in 1913, for more than a decade.  He knew what the public wanted and he provided it.

The history is accurate enough, but it is revealed subtly and only when absolutely needed.  Nobody's character develops much except for Lincoln, who undergoes every bit of suffering during the bloody Civil War but keeps on going because do so is the right thing.  He frees the slaves.  He lets the defeated Confederate cavalry keep their horses to till the land.  And as we all know, for this he was shown no mercy.  The assassination, which we all know is coming, is handled in the only way it can still be shocking - in a true coup de theatre, which must have been a nightmare to stage (Barry Jackson himself designed the sets).

Traces of the conventions of the English Arts Theatre movement survive in the poetic chorus of two 'chroniclers'.  These are easily ignored for the modern reader.  We will simply say, this is why Drinkwater was the least successful of the core Georgian poets.  He made up for it by being a much better playwright than any other (and, for those who don't know, all the others wrote plays).