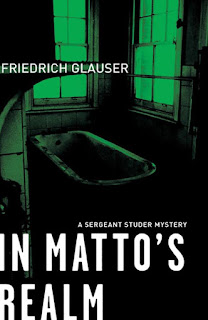 A real discovery!  Friedrich Glauser (1896-1938) is called the Swiss Simenon but is far more interesting.  Here, he sets his story in a Psychiatric Clinic - the director has gone missing as has one of his patients, a self-confessed child killer.  For most writers this would mean a great deal of painful research.  Not for Glauser, a schizophrenic who had spent long periods of time in such clinics.  On top of that he was addicted to morphine and opium, had done time for forging prescriptions, and had served in the Foreign Legion.  He wasn't even Swiss - he was born in Vienna.

So what does a madman make of the madhouse?  He of course has great sympathy for the patients, but also the staff.  The most compelling character in the novel is Dr Ernst Laduner, the deputy director, who has a smile that looks like it's been pasted on, eccentric verbal tics and a taste for sometimes brutal experimentation.  And then there's Glauser's series detective, Sergeant Jakob Studer, formerly an inspector but busted back to sergeant, aged fifty, by his bete noir Colonel Caplaun, whose alcoholic son just happens to be a patient of Dr Laduner.

The story grips like a vice.  We become fully conversant with this alien world and its inhabitants.  The year is 1936.  In Germany radical events are underway but all we hear of them is an unidentified voice ranting on the radio.  This is clearly Hitler, who would have no toleration whatsoever for someone like Glauser.  And this is Glauser's genius - we have to work these things out for ourselves, though we are left in no doubt about Studer's antipathetic views on fascism.  Indeed, Studer does many things we might not expect of a heavily-built German-speaking cop coming up to retirement.

It's a thrilling, fascinating and in many ways beautiful book.  At this halfway stage of the year, it's my favourite read of 2021.