Michael Hastings was the enfant terrible of the Angry Young Men. Look how young he was when his first plays were produced. He was always political and had a lifetime fascination with Africa. I remember watching his TV epic, The Search for the Nile, several times, and on the basis of that I bought his first collection of published plays when I was still at school. 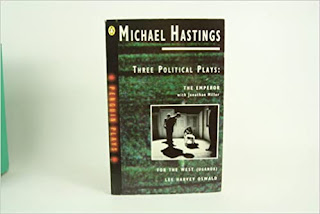 This Penguin collection brings together three of his most overtly political plays. In chronological order, Lee Harvey Oswald was first staged in 1966, two years after the Warren Commission published its transcripts and report, deciding that Oswald was the lone shooter of President Kennedy in Dallas in November 1963. It is essentially a documentary drama, with the Commission members, combined in one body, questioning its best two witnesses - Oswald's batty mother Marguerite and his terribly young Russian widow Marina. They act out their relevant remembrances of Lee as he goes progressively off the rails. Hastings does not throw into question Lee's guilt, though he does mention a few anomalies. He is much more interested in the question of context - what was it that so radicalised the assassin?

For the West is a study of the crazed dictator Idi Amin, written ten years after Oswald but still while Hastings was under forty and while Amin was still propped up in pretend power by those who pulled his strings. It is good, but not as good as Oswald. As a character Idi is less compelling than Lee. I suppose the problem is, Idi was always going to fall one way or another. Lee is the man who stopped us finding out what kind of president Kennedy could have become in a second term.

The Emperor is a dramatization of Ryszard Kapusccinski's long-form journalistic account of Haile Selassie's fall, which I reviewed a year or two back on this blog. The problem here is that there is nothing to dramatize, or at least nothing that benefits from dramatization. The key to the book is that we hear the testimony from real people who worked as part of the imperial household. They know it is all sham, they know they look ridiculous to the outside world, but these are the best of all possible jobs in a land bled dry. The other thing is that all reported the Emperor as a silent figure into whom his subjects could read whatever they wanted. The play isn't helped by the typical Jonathan Miller production device (Miller is given a co-writer credit, though what he could possibly have added is beyond me) of a handful of actors acting the parts and playing silly buggers with doors and windows. The sort of rubbish that was considered cutting edge in 1987 but led to the total extinction of serious straight plays in the commercial theatre.