Down for the Count - Martin Holmen 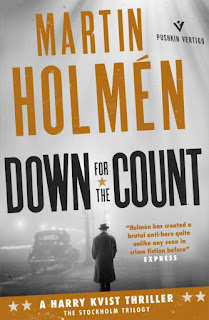 Harry Kvist never took a count in his boxing career but things have got pretty low since his retirement. He is fresh out of jail after serving eighteen months for intimidation. He misses his prison boyfriend, he needs money, he needs his old friends. But the old laundress in his street has died at the hands of her retarded son. She has left Harry a note, reminding him that he promised to look after the lad. And so Harry launches into an investigation which brings him into contract with the old woman's long estranged daughter, local property developers, the asylum where the boy is now imprisoned, the special school where he was educated, and the special police squad who look after the special needs of the Swedish king.

Every bit as good as Clinch (the first part of the Stockholm Trilogy and reviewed on this blog a couple of years ago), Down for the Count is full of compelling characters, brutal action and dark humour. I can't wait to get my hands on the third instalment, Slugger.
Posted by rogerwood at 16:31