The Vampire of Ropraz - Jacques Chessex 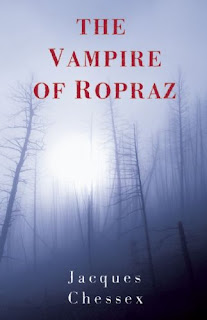 This short novella is a late work by the prize-winning Swiss author who died in 2009. It gives the impression of being the straightforward telling of a true-life crime from 1903 but that is a scrupulously maintained illusion. One trick I especially enjoyed was the involvement of Blaise Cendrars, the pioneer of European modernism. I doubt very much he was actually involved with the titular vampire. On the other hand, he definitely wrote the novel Moravagine, which is the novel Chessex says is about the vampire. Cendrars published Moravagine in 1926 but apparently spent much of the rest of his life adjusting and rewriting it. These are the levels of smoke and mirrors which Chessex has whittled down to 106 pages of text.

Returning the plot, Ropraz is a deprived community in 1903 when the graves of young woman are torn open and their bodies violated. It doesn't take very long to identify the person responsible - a twenty-one year old orphan called Charles-Augustin Favez, caught (red-handed as it were) having sex with animals. He is psychologically appraised and the appraiser uncovers the huge level of deprivation and abuse which has led to Favez's brutalisation. No modern Swiss court can do anything other than commit Favez to the asylum.

That isn't the end of the story but to say more would be to give too much away. I want everyone who reads this post to seek out Chessex. Before this I had never heard of him. He doesn't appear to be translated into English much, and I have to note that the translation of Vampire by W Donald Wilson is not exactly beyond reproach. There are a couple of novels available. Meanwhile, Moravagine was translated back in 1968 and I am determined to track down a copy.
Posted by rogerwood at 16:59