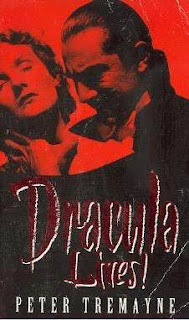 This is the third of Tremayne's Dracula Lives! series, which I have been reading, intermittently, for five years. I reviewed Dracula Unborn on this blog in September 2015 and The Revenge of Dracula in January 2018. I remarked in the latter that whilst all three novels use the found manuscript device, they are each set in different periods. Unborn was in the 15th Century whereas Revenge jumped to the middle of the 19th. Dracula, My Love is only twenty years or so on from Revenge, set in 1871-2, and is the story of a Scottish orphan, Morag McLeod, who ends up as a nanny in Prussia. As nannies always do, she gets pregnant by the adult son of the noble house. He is killed in the Franco Prussian war and Morag is sent packing to the establishment of the count's sadistic brother in Romania. The baby dies, the baron rapes her, the baron gets his rightful comeuppance and Morag flees to Transylvania where another count is advertising for a governess. It will come as no surprise who the count is.

The story is predictable but very well done. My attention didn't flag for a single moment. What fascinated me was the presence of Dracula's cousin, Elisabeth Bathory (memorably played by Ingrid Pitt in Hammer's Countess Dracula). More fascinating still, Elisabeth seems to have some sort of slasher robot, which Tremayne explains in a footnote. This will simply have to be followed up.
Posted by rogerwood at 15:25