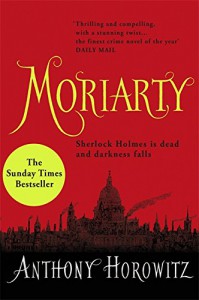 I am no great fan of the Sherlock Holmes stories which even as a child struck me as more legerdemain than logic. I am, however, a big fan of John Gardner's Moriarty series from the middle Seventies and, posthumously, 2008. To tell the truth I grabbed this off the library shelf because I thought it was the 2008 instalment.


But no, it is Horowitz, he of Midsomer Murders and Foyle's War and the Alex Rider series of thrillers for Young Adults. I liked Foyle's War, Midsomer Murders was meretricious trash, and I am far too old to have encountered young Master Rider. Still, I'm game. I gave it a good go. I finished it. I enjoyed it .. to an extent.


There can be no doubt that Horowitz is a proficient writer and a master storyteller. His characterisation, here at least, and for a reason I will not go into, is thin and two-dimensional. Briefly, and hopefully without giving too much away, the intricacies of the story rather limit what he can do in terms of character development. There is none; it's all about revelation.


Broadly, the premise is this: Moriarty and Holmes have vanished into the Reichenbach Falls; American gangsters seek to take over Moriarty's British crime empire; Frederick Chase of Pinkerton's and Inspector Athelney Jones of Scotland Yard team up to thwart them.


There are touches which border on genius. For example, Jones has made himself into a Holmes superfan, dedicated to the continuity of his methods. There is a superbly psychopathic teenager. The Holmes/Watson trope is worked for all its worth in the Jones/Chase relationship. But in the end it all depends on the big twist and how you react to it. It is a huge, massive, stupendous twist and I hated it. I considered myself cheated. I'm still offended by it 24 hours after I read it.


Horowitz includes his own Sherlock Holmes short story, "The Three Monarchs", as an extra, which cleverly reflects the main narrative with Inspector Jones. It struck me as very much in the Conan Doyle tradition, so obviously I didn't like it much. On the other hand, at least it didn't rest on a make-or-break twist.
Posted by rogerwood at 14:52