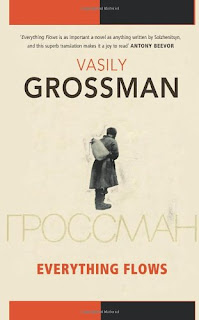 I tried reading Grossman's Life and Fate when Radio 4 did an epic dramatisation a couple of years ago. I failed. I saw this much shorter work and thought it might be a way in to Grossman's work. I finished it, which was good, but I'm not sure I want to commit myself to another go at Life and Fate which is ten times longer.


Don't get me wrong, Everything Flows is a major work, impressive in many ways. It took Grossman eight years to write, his last eight years, and it is obviously unfinished. But there are several problem. It is a story of the Gulag - specifically the challenge facing Ivan Grigoryevich on his release after thirty years - and the atrocity of the Soviet penal system is always interesting. But it is not Grossman's story. Despite being Jewish, intellectual, a writer and opinionated, he was in no way suppressed by the Stalin regime. Indeed, his fame as a war reporter - his account of the extermination camps was used as evidence at the Nuremberg war trials - cushioned him from criticism. Some of his novels and short stories were successful. It was Krushchov rather than Stalin who took against him and the late novels were held up indefinitely as the censors demanded more and more rewrites.


The unfinished nature of the book, no doubt exacerbated by Grossman's stomach cancer, is all too evident. He has no vision for what the novel should be. He has an overarching theme about the Russian people's fetish for totalitarianism but cannot find a way to incorporate it as story. Instead the last quarter of what is only a 220 page book is given over to a historical essay purportedly written by Ivan Grigoryevich after the death of his landlady-lover. The essay is far too long and full of rather convenient aphorisms which strike my inner ear as glib and facile rather than insightful. It suffers especially because it follows a first-person narration of the Ukranian famine by the landlady-lover which is truly heart-rending.


There are other promising strands never followed up on - a widow who is sent to an all-female camp in Siberia and Ivan's cousin Nikolay, who has done rather well out of playing the system and thus feels an appalling burden of guilt. What we are left with, then, is the skeleton of a potentially great novel in progress.


There are, in my view, far too many notes and explanations. There was one thing that struck me, though, in the afterword by Grossman's daughter. When the novel came to light in the Perestroika era no Russian paper would publish it because it wasn't sufficiently Gulag. Are we any different today? An unfinished collection of linked fragments like Everything Flows gets translated and published because it supports our preconceptions about Soviet Russia whilst complete novels of Russian heroism, like Grossman's Stalingrad (For A Just Cause), based on his actual experience, are passed over.
Posted by rogerwood at 14:53

Email ThisBlogThis!Share to TwitterShare to FacebookShare to Pinterest
Labels: Everything Flows, For a just cause, Gulag, Life and Fate, Russian fiction, Stalin, Stalingrad, Vasily Grossman