Lincoln in the Bardo - George Saunders

Well, what can I say? Where do I start? Lincoln in the Bardo is, quite simply, the most extraordinary book I have read in years. It is experimental, existential and yet profoundly moving. It is, on the face of it, bat-shit-crazy, and yet it never once loses its humanity. 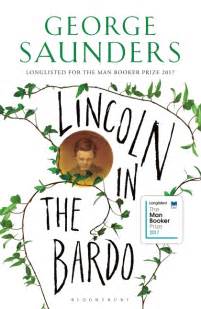 I am kicking myself for not realising up front what the Bardo is. I thought it was perhaps a district in Washington. Obviously, it is Bardo Thodol, the Tibetan version of the Elysian Fields, where the dead go initially, before moving on to an even higher plane. As a writer on the Elysian conversations of Eric Linklater and a researcher into the early work of Ted Hughes, who was deeply immersed in Bardo-based projects which never saw the light of day, I consider myself duly abashed.


We enter the Bardo through many pages of quotations, which as far as I know are genuine, from accounts of the death of 11-year-old Willie Lincoln, son of the President and possibly the first presidential child to die in the White House. These then segue into snatches of speech from people who seem to have nothing whatever to do with Willy or Abe - Roger Bevins III, Hans Vollman and the Reverend Everly Thomas, who we come to realise are our guides to this entry level of the afterlife. They are spirits and make no physical concessions to their former corporeality. Mr Bevins has hundreds of hands and eyes, Mr Vollman a prodigious member. They have come across the new arrival and don't know how to help. Children normally pass through this stage quickly but something is keeping Willie back.


That something is his father, the President the psychopomps have never heard of, already weighed down by the horrors of a civil war they cannot imagine. He comes to Willie's tomb, takes out the body and cuddles it, unaware that everything he loved about his son is looking on. It is young Willie who in the end comforts his father and persuades the spirits of the Bardo (of whom we encounter dozens) to accept what they have thus far been unable to accept - their death. It's a beautiful touch - Saunders creates euphemisms for the Bardo like sick-box instead of coffin. The book ends in a blaze of multiple matterlightblooming phenomena as the Bardo depopulates.


It sounds ridiculous - it looks impossible on the page, with chapters as short as a single line and all the conversation laid out like quotations and no non-speech at all. And yet it works beautifully. Saunders is a well-respected essayist and short story writer but, amazingly, Lincoln in the Bardo is his first novel. Turns out it was well worth waiting for. It's an instant classic of modern American fiction, comfortably up there with Pynchon and Salinger and Jonathan Safran Foer.
Posted by rogerwood at 14:30