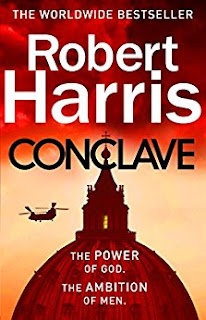 Robert Harris seems to have set himself a challenge - how to turn the well known or unthrilling into compulsive reading. For An Officer and a Spy he took the Dreyfuss case, which surely at least half his readership must have known, and made it fresh and compelling. In Conclave he has taken a subject which I for one could not care less about, limited it purely to the arcane election process of the new pope - no murders, no espionage, precious little scandal - and made it absolutely thrilling.


I have witnessed many vote counts, even as it happens presided over one just as arcane as the papal system, yet I was 100% enthralled. How does Harris do it? It's not clever literary tricks. It's certainly not wordplay. The plot in Conclave is more or less prescribed by ecclesiastical law and fairly predictable. I guessed who was going to win the moment he showed up and spotted the twist, although I admit I didn't quite get it right, and Harris revealed it really well. I can only conclude it's the honesty of his approach. He actually cares about these elderly men and their ancient task. He has done his research in impressive depth and is not ashamed to tackle the prickly question of faith. It is not, of course, the present pope he is writing about or indeed the last, but the cloistered election takes place against a distant backdrop of an absolutely contemporary Europe.


As an exercise in the craft of storytelling Conclave is a masterclass. I am not religious, couldn't care less about the papacy although I do rather admire the current incumbent, but Harris played with my emotions like a virtuoso. He keeps getting better and better and if he keeps on at this standard I might yet forgive him The Ghost.
Posted by rogerwood at 14:48

Email ThisBlogThis!Share to TwitterShare to FacebookShare to Pinterest
Labels: An Officer and a Spy, cardinals, Conclave, Pope, Robert Harris, The Ghost