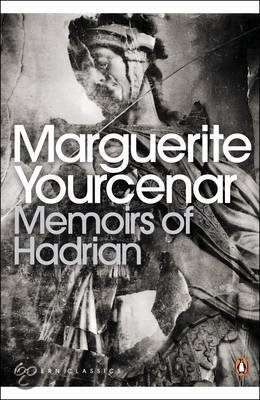 Published in 1951 and translated into English three years later, this is the novel that made Marguerite Yourcenar (born de Crayencour - it's an anagram, geddit?) internationally celebrated. I say celebrated rather than famous because I doubt very much it was ever a bestseller. It's far too recondite, academic and, dare I say it, dull. Her success thereafter was measured in the usual terms for French litterateurs - Ivy League professorship and admission to Academie Francaise. To be fair, Yourcenar was the first woman academician. Shame it wasn't on the basis of a better book.

To be objective, there can be no doubt of her literary skill. The text convinces on the level it professes, a vast letter of advice from a not terribly distinguished emperor to the teenage next-heir-but-one, who isn't his grandson or even a relative. Where it fails is in revealing the soul of the man. Hadrian is famous for his wall. Other achievements, such as the Pantheon in Rome, are generally less known, and his military record was confined to places no one but a classicist could point to on a map. His reign was the result of a good deal of sucking-up (to his predecessor Trajan and, more significantly, Trajan's wife Plotina), a generous slice of being in the right place at the right time. and ostensibly not much else. He was a consolidator, not a conqueror, a Hellenist, a man of culture - and a man of terrific ego, apparently, given the number of settlements he founded in his own honour. He was a nasty piece of work to women other than Plotina, and hopelessly in thrall to the Bythian youth (no, no idea where Bythia might be) Antinous.

Antinous is Yourcenar's biggest failure here. She cannot give him any character because it is Hadrian's version of events we hear and Hadrian - here at any rate - sees Antinous only as living work of art. We are left in no doubt that their relationship is sexual, but get none of the action. Antinous's suicide, around the age of twenty, must surely have been the turning point of Hadrian's emotional life, yet we learn next to nothing. He simply founds a city in the lost boy's honour. Perhaps Yourcenar hoped to go further - I could not be bothered finishing her pretentious Reflections on the Composition of the Memoirs of Hadrian appended to this volume - but found herself trapped in her narrative device. After all, Hadrian is writing to another teenage boy, the future Marcus Aurelius.

I don't begrudge the time spent persevering with Hadrian. It is scrupulously researched, finely written (although I'm not convinced by Grace Frick's translation). It's an achievement. Sadly, it's not at all entertaining.
By the way, Penguin Classics, that's a horrible cover.
Posted by rogerwood at 15:15