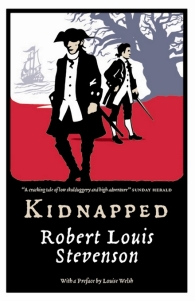 RLS has been poorly served by posterity. He remains extremely famous; everyone knows the title of at least three of his books - and yet do we actually read them or are we put off by hammy films, cheesy TV adaptations, or the countless continuations or reimaginings of variable quality? Are Kidnapped and Treasure Island yarns for Victorian boys? The truth is, we are put off. Which is grossly unfair considering the brilliance of his prose and the finely-tuned directness of his storytelling.

Anyway I'm very much not a teenage boy, except at heart, I am as highly qualified academically as it is possible to get - in literature, moreover - I have always been put off RLS by associated crud, and I am so glad I have now discovered him on my own terms. Forget all those quasi-academic theories of narrative by people who have never written narrative. This, right here, is how to write an action thriller.

The plot is so well known, do I need to spell it out? Orphan David is sold into slavery by wicked Uncle Ebenezer to deprive him of his rightful title. David is rescued by adventurer Alan Breck and after many scrapes is restored to his legal status. Actually, I probably do. Did you realise that the kidnapping was actually about enforced slavery on the American mainland? No - because no Disneyfied movie is ever going to mention such a disgraceful practice. I hadn't realised that David and Alan Breck are shipwrecked in the Highlands and Islands and that the trek to Edinburgh is actually a trip south. I certainly never knew that Alan Breck Stewart was a real person and that his involvement in the Appin Murder of the Red Fox, Colin Roy Campbell of Glenure, was pretty much as described here.

What we have, then, and what is always played down in dramatisations, is a political subplot. David is a Whig, a supporter of Hanoverian rule, a Protestant. Breck is a Jacobite (in real life he defected from the English army to the Scots at Prestonpans), an enemy of the state and Catholic. All this is fully explored in the conversations they have whilst hiding from the redcoats. The abject poverty of the Highlands after the putting down of '45 rebellion, is vividly portrayed in Chapter 23 "Cluny's Cage". Cluny is chieftain of the Clan Macpherson, stripped of his titles and estate by Act of Parliament and reduced to living in a patched together structure of living trees and a nearby cave. Yet he maintains his dignity and his social role and responsibilities.

In contrast to Cluny, two chapters later we encounter Robin Oig, one of the sons of Rob Roy Macgregor.


He was sought upon all sides on a charge of carrying a young woman from Balfron and marrying her (as was alleged) by force; yet he stepped about Balquidder like a gentleman in his own walled policy. It was he who had shot James Maclaren at the ploughstilts, a quarrel never satisfied; yet he walked into the house of his blood enemies as a rider might into a public inn.

Cluny Macpherson is a natural aristocrat, Robin Oig Macgregor a pure thug. The Scottish Highlands in 1751 is like the American Wild West in 1870.

I loved this book. If you haven't had the delight of reading it as an adult, I urge you not to miss out.
Posted by rogerwood at 14:54