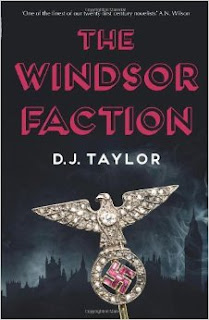 It's an alternate history: Wallis Simpson has conveniently died and Edward VIII thus has no reason to abdicate.  Hitler, of course, still invades Poland and we still go to war.  The twist is that Edward, the Hitler fan, becomes the puppet of the Peace Faction led by Captain Ramsay, the Tory MP for whom section 18b of the Defence Regulations was invented.

Ramsay, for the avoidance of doubt, was so fervently pro-Nazi that he undoubtedly committed treason. The American Embassy cipher clerk Tyler Kent is also real and also a traitor.  Most other characters here are fictional. Beverley Nichols, however, is a very surprising real person to include here, as the author of a heavily nuanced pro-peace King's Speech 1939.  The storyline is, of course, fictional, yet it ends up pretty much as happened in reality, with Ramsay interned for the duration. The odd thing is that the real MI5 agents who trapped him are much more interesting than the fictional Special Branch operatives who pursue him here.

It used to be forbidden in the UK to mention the Right Club (Ramsay's subversive Nazi group) but John Major, of all people, lifted the ban in the early Nineties, so I can't see why Taylor felt the need to invent in this aspect.  The King, indisputably a cracking idea, doesn't really amount to much: Edward was a weak, vain man who would probably have ended the monarchy.  He was passive in life and, unfortunately, he is a nonentity in this story.  The characters who really leap off the page are our heroine Cynthia (and her colonial parents) and, of all people, Beverley Nichols, who was known in my youth for writing in ladies' magazines about flowers.

Taylor switches tense and voice for the various storylines.  Nichols shines because Taylor creates a journal for him.  Cynthia is mainly third person traditional narrative, and the machinations tend to be present tense.

Yes, the novel has faults, but it is driven by sheer imaginative force.  Taylor, whose work I have not read before, writes with both depth and breadth.  He never loses impetus or conviction and there are passages so witty that I laughed out loud, which doesn't happen often.  I am very keen to read more of his fiction.
Posted by rogerwood at 14:31