The Man Who Was M - Anthony Masters

The subtitle of this minor classic from 1986 is "The Life real-life spymaster who inspired Ian Fleming". Well, we all need a hook, but the connection is wafer thin.  For one thing Maxwell Knight was never a field agent and never travelled the world in the hunt for foreign agents.  Max was strictly London-based and spent his MI5 career bringing down the enemy within, be it Percy Glading, communist co-ordinator of the Woolwich Arsenal spy ring of 1938 or the highly-connected Fascists of the Right Club two years later. In both instances Knight infiltrated glamorous young women agents (Olga Gray and Joan Miller respectively) whilst he stayed secluded in his flat in Dolphin Square.with his menagerie of snakes and aye-ayes and bugs. 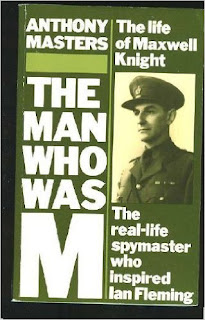 It's not just the wildlife that distinguishes Knight from James Bond, it's also the sex life. Not only did Knight never have sex with Gray or Miller, albeit both were in love with him and the latter even lived with him, he was married three times and never consummated any of the unions. Knight was frankly weird. Masters ponders his subject's sexuality but of course cannot come up with a conclusion.

After the war Knight became, of all things, a freelance broadcaster on natural history with the BBC. Indeed it was as the much-loved Uncle Max, author of books for children such as The Young Naturalist's Field Guide (1952) that he was memorialised when he died in 1968.

Masters' account of the Right Club is a good as any.  His rendering of the Woolwich Arsenal case is better than most and I had never before across the case of Ben Greene, cousin of Graham and (Sir) Hugh, which ultimately ruined Knight's standing in spy-circles, although I suppose there are worse things than being ostracised by an MI5 run by the likes of Burgess, Maclean, Blunt and Hollis. Masters spoke to people who knew Knight, including his two surviving wives, who can of course never be asked again.  The only trouble is, he says that Knight was 68 when he died.  No he wasn't; he was born in September 1900 and died in January 1968. He was therefore 67. A minor slip, perhaps, but it undermines confidence.  That's why I called it a minor classic. A bit more care and The Man Who Was M might just be a classic.
Posted by rogerwood at 17:02