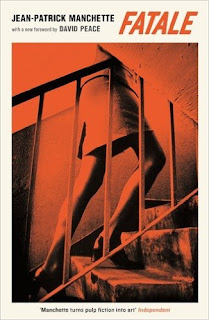 Manchette was only in his early fifties when he died and wrote less than a dozen crime novels, yet he founded a sub-genre (neo-polar, or new crime fiction) that is still hugely influential. David Peace writes the introduction to this edition and the echoes of Manchette in his work soon becomes clear.

Manchette is big news in France but only three of his neo-polars seem to have been published in English translations.  In this instance I'm not sure about the translation by Donald Nicholson-Smith. On the one hand it seems awkward and stilted; on the other, what are you supposed to do with sentences like this, describing two local newspapers: "One of them championed a left-capitalist ideology; the other championed a left-capitalist ideology"? In fact, I really must brush up on my French and have a go at the original. Overall, I suspect the Nicholson-Smith has got it right.

Manchette's twist on the traditional crime novel is that he is clear throughout that he writes, unlike his fictional provincial newspapers, from the Hard Left.  The aristocracy is debased and the bourgeoisie is contemptible. His is a world of Marxist black and white, good and bad.  Actually, just bad.  His femme fatale, Aimee - which we are told straight-off his not her real name nor even the name she will be known by tomorrow - is the ultimate of her kind, sexy and utterly amoral.  She kills for a living. The mystery of the novel is who will she kill in this little town, and how will she profit from the kill.

Like all the best noir, Fatale is brutally short, just 90 pages. I'm not keen on padding the physical book out with forewords and afterwords and this edition has both, the former by Peace, the latter by Jean Echonoz, who I have not heard of before but who I will keep an eye out for now. I have to admit that they add to the experience. Indeed, without them it might have been difficult to engage with Manchette's text.  Engage I certainly did. I loved it. I want more.
Posted by rogerwood at 17:44