Now, I have always approved of Banville's secondary career as Benjamin Black.  I have reviewed most if not all of his oeuvre on this blog.  OK, I didn't like Christine Falls as much the other Quirke novels, but I loved the faux Chandler of The Black-Eyed Blonde.  It is scarcely a secret that I am drawn to novellas, largely because they are all I can write myself in my current condition, so when I saw this slim volume by Black sitting on the shelf I had to have it, 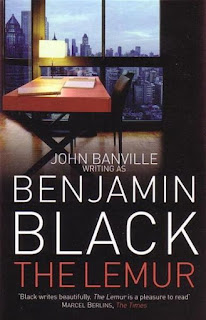 Woe is us, for we are undone.  This - and I have to be blunt because Banville-Black is a major writer with a reputation of which he is prickly proud - is execrable scrapings from the barrel base.  What is the bloody point?  It's short but it is not a novella because a novella is as long as it needs to be whereas this is as long as Black can stretch the tissue-thin plot.  The characters are all horrible without a single redeeming virtue, and that's only the main characters, the other participants have no character.  The character who might just have sparked some empathy, the titular Lemur, is the victim in the so-called mystery.  The obvious solution is someone we have never encountered and therefore don't give two hoots about.

It's set in some ghastly super-rich New York milieu in which multimilliionaire Big Bill Mulholland is ex-CIA (yawn) but still wants his forty-something son-in-law, the Irish super-journalist John Glass (don't give me that, Banville, I've read Irish newspapers) to write his biography, which - surprise, surprise - quickly uncovers uncomfortable truths.  Glass is too lazy to do any writing, his wife is a sexless rich bitch, his mistress is a Boho artist who splashes paint about to no effect, and stepson David is Tony Curtis sending up Cary Grant in Some Like It Hot without being in any way amusing.

It's awful.  It's like the American  TV super-soaps of the 1980s and just about as insightful.  It will be a while before I go near a Banville-Black again.
Posted by rogerwood at 16:29