The Testament of Mary - Colm Toibin

I remember when this novella came out in 2012. There was a lot of fuss, mentions of transgression.  Turns out it's not transgressive at all and rattles no more cages than Toibin's supremely bland Brooklyn which came out around the same time. 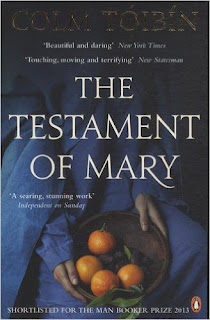 This is not to say it's badly written.  It's not. Nor is it illuminating, moving or - I'm afraid to say - particularly interesting.  The Jesus who appears here is the official one, the one who works miracles, who speaks in Thee's and Thou's, and who is obsessed with his mission.  The disciples, unnamed, who pop up from time and time, are slightly more interesting, after the crucifixion squabbling about what is the official version and who gets to write it, at the crucifixion itself notable by their patently craven absence.  Indeed, it was this explicit suggestion by Toibin, through Mary, that I found the most interesting aspect of the book.

Mary herself is sadly not especially interesting.  Her role seems to have been the Gospel one - she gave birth to Jesus, nursed him through infancy, and tben lost touch or was cast off.  The title is accurate; this is Mary's account of what she saw of her son's ministry and death - the account the Gospel writers prefer to ignore because it tends to diminish them.  The structure, switching between Mary's declining present and the dangerous past in which her son is captured and crucified, works well.  Toibin doesn't shy away from the other Marys of the traditional narrative and focuses on Mary, the sister of Miriam and Lazarus.  This Mary accompanies our Mary to Golgotha. She also links in Lazarus, raised from the dead after four days - we are left in doubt that he was really dead and returned - but not to full life.  He cannot eat or drink, just moans and groans, evidently in mental and physical pain.  The present Mary is also facing up to death.  The question is suggested: Will she be restored to eternal life as the gospellers would have her believe, or the sort of quasi-life that Lazarus endured?

Perhaps Toibin would have done better to explore the Lazarus story.  He didn't and must be judged on what he did write.  As I say, the writing is masterly.  There are subtle questions and suggestions here.  Overall, though, I found it hard to care about this Mary whose only purpose in life seems to have been to act as a divine birthing pod and, for a brief few weeks, mute witness to an appalling death.
Posted by rogerwood at 15:49