The Sailor Who Fell From Grace With The Sea -Yukio Mishima 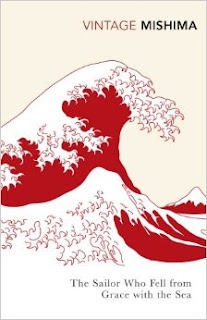 Perhaps Mishima's best known novel in the West, The Sailor Who Fell From Grace With the Sea is set in the era of the post-defeat reconstruction.  It is a novel of the early Sixties.  The characters, even the children too young to remember, are touched by the aftermath of the war and the subjugation of their nation.  The peephole in Noboru's bedroom and the 'dry dock' where the gruesome denouement takes place, are both relics of US occupation.

The focus is kept tight on Noboru, his widowed mother Fusako, and the new man in Fusako's life Ryuji, the titular sailor.  Aside from the actress Yoriko and the assistant manager Shibuya, who represent the two sides of Fusako's character, passion and punctiliousness, other key characters are not named.  Noboru's schoolmates - his gang - are simply the chief and number one, number two, and so on.  Noboru is number three.  They are all good students from good families, but we soon discover there is very little good about them.  They consider themselves superior.  They disdain their inferiors.  They set their own rules.  The chief has a book of Japanese law.  He knows time is running out for them.  Consequences will be different when they turn fourteen.

Mishima is such a genius in his structure.  We get drawn in to the nob of the story via the gang.  Noboru finds the peephole and watches his mother naked and masturbating.  Soon after he watches Fusako and Ryuji having sex.  As romance blossoms, sex turns to love, and their lovemaking becomes more private.  Noboru starts listing Ryuji's offences, perceived slights to the boy's elite status.  All of this he shares with his gang, the first intimation we have that these children are not normal.  In the middle of the book Mishima shows us just how abnormal they are, setting us up for the ending which he brilliantly doesn't show because what we imagine is so horrible.

In many ways this is Japanese noir.  The tension, the torrid atmosphere - literally, the fall from grace.  A modern masterpiece without any doubt.  My only criticism is that translator John Nathan (admittedly doing the work in 1965) is too quick with American colloquialisms.
Posted by rogerwood at 17:39