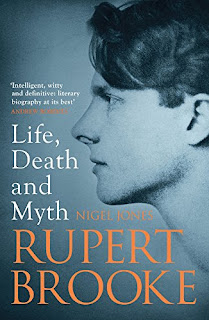 Jones's book, first published in 1999 and revised for this Head of Zeus edition in 1915, is the most up-to-date study of the poet. Like Lehmann (reviewed below) it has the advantage of being written after all the guardians of the flame (the Brooke Trustees) had died and relinquished their stranglehold, but Jones rather tarnishes the freedom by making Brooke as unpleasant as possible. Some of Brooke's behaviour, particularly to women, is shameful - but I wonder, weren't we all like that when we were young and naive? Brooke was only 27 when he died, which admittedly is not all that young, but he was still financially reliant on his mother and surrounded by friends, would-be lovers and general sycophants who surely retarded the development of his character. Having now studied dozens of books on him in the last three months, I am of the opinion that Brooke only approached man's estate after his last tour to America and Canada and the South Seas in 1913-14. His behaviour seemed to moderate (Maurice Browne's 1927 Recollections are helpful in this, as he only met Brooke in 1914) and people started to see him as a man rather than a gilded youth. Certainly his poems mature considerably between Georgian Poetry (1911) and the war Sonnets (1914).

Jones's book is also absurdly long at 564 pages. You simply cannot justify that level of wordage for a man who died at 27. Equally, there are only so many times you can criticise the stifling hand of his patron Eddie Marsh and the Trustees under his lifelong friend Geoffrey Keynes. Both these men were successful and important in their own right. They believed - genuinely - they were acting in Brooke's best interests at the time and, given that neither disposed of the less flattering material, I believe it is reasonable to suppose that they realised attitudes would change in later years. Keynes was still alive when Michael Hastings produced his iconoclastic work, The Handsomest Young Man in England in 1967, and nobody tells Hastings what to write.

In summary, everything you could possibly want to know about Rupert Brooke is here in Jones. You might want to moderate Jones's rather black and white judgments a little with Lehmann and a look at Hastings (essentially a picture-book interspersed with very interesting commentary). If you can find a copy (it was privately printed) Browne is a startling insight into the modernist world that Brooke also enjoyed. Chicago is, after all, a long way from Grandchester.