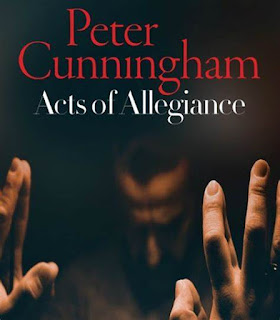 I find myself conflicted over the modern Irish novel, of which this is certainly one. I hate the formulaic family-in-a-misty-soggy-paradise novel which has dominated the Booker for so long. On the other hand there are standout marvels like Roddy Doyle. Peter Cunningham, on the evidence of this novel, falls somewhere between the two.

There are heinous echoes of the formula - the roguish Pa who puts on a front, the matriarch's house which includes people who may or may not be family members. But against that we have the personal story of Marty Ransom who has bridged the border by collaborating with the Brits whilst building a career in the Irish diplomatic corps. And the compelling antagonist of Iggy Kane, Marty's cousin and childhood boon companion.

The balance between the two is not quite right. Cunningham essentially has three storylines going - childhood, young adulthood, and subsequent, ultimate  betrayal. The one that doesn't get quite enough play, for me, is the betrayal. We perhaps need just one more example of Iggy's activities in the North before he blasts his way back into Marty's life. That said, the betrayal itself is beautifully done.
Posted by rogerwood at 15:52