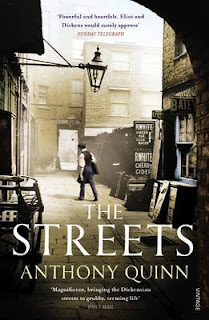 London, 1882. David Wildeblood is the new Somers Town correspondent of Henry Marchmont's campaigning newspaper The Labouring Classes of London, a post secured for him (after some personal difficulties) by the godfather he has never met, Sir Martin Elder. Somers Town, for those who do not know, is the site of the future Euston Station. In 1882 it was a warren of decaying housing, a slum but not quite a Dickensian rookery. It is an alien world to the naive young David but he finds a guide, the market trader Jo. He also finds that the local vestry - equivalent, more or less, of a parish council - is comprised of dodgy landlords who actually own the slums, for which they charge extortionate rents. This leads the bold investigator to a larger, more sinister conspiracy, involving forced evacuation of the poor and even eugenics.

The initial premise, the corrupt vestry, was familiar to me, probably from the real-life work of Mayhew and Booth, both of whom Quinn acknowledges as sources,* but where the author then went with it was fresh and startling. Quinn makes his point, which is not a million miles away from the subtext of the Cameron-Clegg coalition in 2012, when he wrote it, without ever cutting back on the literary quality. Quinn is a very fine novelist indeed. Not many contemporary novelists could get away with 'refulgent' but Quinn does, twice.

More important, of course, are his characters, all beautifully brought to life in three dimensions. I was extremely impressed.

* Since writing the above I have remembered where I saw it - Sarah Wise's The Blackest Streets, which is also credited by Quinn and reviewed on this blog.