In a House of Lies - Ian Rankin 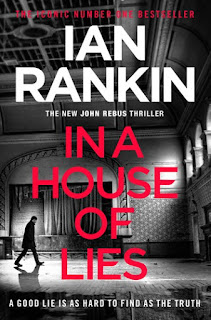 The odd dud is inevitable when you are as prolific as Ian Rankin, and this is undoubtedly one of his. It seems to be based on two celebrated podcasts about murder, the Adnan Syed case which made Serial a worldwide hit and the murder of Daniel Morgan in London in 1987. Basically we have the murder of a private detective and the key clue about how long a car was parked where it was found which hinges on the analysis of soil and grass. Note to Rankin: You're a crime writer; never assume your crime readers are less informed than you are.

The second problem is that Rankin continues to employ the detective triad which, for me at least, is no longer interesting or indeed credible: Rebus, Malcolm Fox and Siobhan Clarke. It is essentially a good idea. Now he is retired Rebus can be even more of a wild card; Clarke has to obey the rules or her long association with Rebus will hold her back; and Fox polices the police. The problem is, they all come with baggage from up to 21 previous outings, or, in Fox's case, from two novels in which he was the replacement for Rebus. This means a certain number of secondary characters have to revisited, even if there is no plotting need. If Rankin isn't at the very top of his game, this can lead to an imbalance between investigation and back story. Needless to say, in Rebus #22, Rankin isn't at the apex of his ability.

It's readable - Rankin is always readable - but the problems are overwhelming. Both the A plot and the B subplot are fundamentally unbelievable; no one kills or accepts the blame for killing for such trivial reasons. And the novel itself is about 25% too long. I hope Rankin recovers form for the next Rebus. I for one could not take another misfire, especially as recent instalments have been so good.