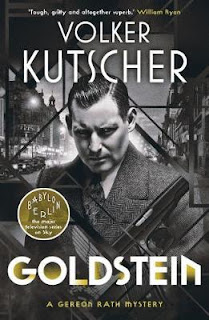 Goldstein is the third of the Gereon Rath novels, not to be confused with the forthcoming third series of the Babylon Berlin TV series, to which the only resemblance is the appearance of Gereon Rath and the Weimar Republic.

The titular Goldstein is an American mob assassin of German Jewish heritage, who pitches up in Berlin in 1931. Rath, having blotted his copybook once more, is given the job of tailing him. Meanwhile someone is killing proto-Nazis, including cops, and Rath is specifically excluded from the investigation - which, of course, means he solves it.

Kutscher's series has been an international hit, in print and more so on TV, the latter because it contains a great deal of sexual material which is absent from the books. The fact remains, though, that Kutscher is not making the techical development he should be. Goldstein is by far the most interesting character here, but disappears for most of it. Rath's sideline working for the gangster Johann Marlow is this time little more than perfunctory.

The book starts off great, with two teenage burglars robbing a major store, but rapidly goes flabby. I enjoyed The Silent Death more than Babylon Berlin but I enjoyed both of them more than I enjoyed Goldstein. Not a good sign for the future.
Posted by rogerwood at 14:34