All literary collaborations seem odd in the age of the single author, but no collaboration has been as unusual or as productive as that of the Askews. They were astonishingly prolific over a short period - up to ninety novels in a 13-year period, glamorous (both born into money) and brave. The last characteristic warrants a sentence all its own. In a forgotten niche of World War 1 they volunteered to the cause of Serbia (also interesting because a lot of British lesbians enlisted as men in the Serbian army) and died when their ship was torpedoed by a U-boat in 1917. 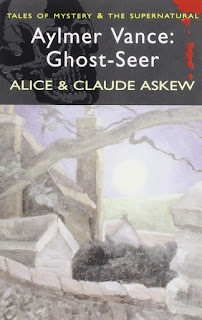 Aylmer Vance was their attempt to cash in on the short-lived psychic detective fad of the pre-war period, kicked off by Hodgson's Carnacki and Blackwood's Dr John Silence. The stories appeared in a weekly story magazine and there are only eight of them. Do not be fooled in this respect. No amount of re-titling can increase the number and "Alymer Vance and the Vampire" is one of them.

The stories are narrated by Vance's amanuensis Dexter, a barrister. Unlike Dr Watson, Dexter has a gift which makes him useful to Vance. He is clairvoyant. Vance is posh, with a country manor and a Mayfair flat. He is a bachelor though, cunningly, this seems to be because he is in love with a Georgian ghost. There is also a rather clever continuity device. Vance and Dexter get to know one another on a fishing holiday, and only after Dexter has demonstrated his clairvoyance does Vance ask him to move in with him and become his investigative assistant. Where Carnacki devotes himself to debunking sham ghosts and Silence is preoccupied with natural forces, Vance favours the historical. When not busy ghost-seeing he travels the world visiting archaeological digs. Thus the first story, 'The Invader', is about a Celtic warrior princess. 'The Stranger' is, quite frankly, a god. The best Carnacki stories are the ones in which the ghost is genuine, whereas with Vance it's the other way round. 'The Indissoluble Bond' is an a awful title but it is a cracking story featuring a burst of Chopin's Funeral March at a wedding.

Only 8 stories means that the collection only lasts 120 pages, which isn't enough. On the other hand, they are all high quality and brilliantly written.
Posted by rogerwood at 15:08