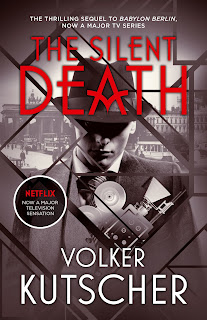 It is February 1930. In Berlin, moviemakers are either struggling to cash in on the new craze for talking pictures or else seeking to protect the 'pure' form of the silents. An actress called Betty  Winter suffers an appalling death when a spotlight falls on her. Soon it becomes apparent that other film actresses are being abducted. When their bodies are found, artfully arranged in closed cinemas, it becomes apparent that someone is removing their vocal chords. Gereon Rath of the Alex investigates.

Of course, Rath being Rath, it is not quite as simple as that. For one thing, his father, the Chief of Police in Cologne, wants him to track down someone who is blackmailing the mayor and future chancellor Konrad Adenauer. Then there is Rath's complex lovelife. He has a complaint lover called Kathi but he still yearns for the part-time whore, part-time police clerk Charley Ritter, who has now given up the whoring to study law. And worst of all, Rath's protective boss Gennat has been seconded to Dusseldorf to try and stop the Vampire serial killer, Peter Kurten, leaving Rath to the tender mercies of Chief Inspector Boehm, who hates him. Oh, and Rath adopts a dog.

This second instalment in the 'Babylon Berlin' series is much better than the first, also reviewed on this blog. Unlike Babylon Berlin itself The Silent Death is not based on some incomprehensible Russian plot. OK, all crime novels tend towards the surreal but at least here it hits upon a unique moment in an extreme industry. The motive is straightforward. There is some very odd backstory but all is explained in the end. The structure is much simpler, the period detail even better, and Rath comes across as a much more rounded character.

Babylon Berlin was a bit of a struggle. The Silent Death was sheer pleasure.
Posted by rogerwood at 14:20