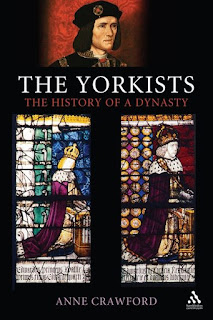 For all the attention lavished on Richard III since the discovery of his body in Leicester, he remains the only well-known Yorkist. Edward IV, who brought England to the threshold of the modern era, remains a shadowy figure and even less is known about his father, Richard of York. Virtually nothing at all is known about the original dukes of York, descending from the fourth son of Edward III, and even less about Richard of Cambridge, grandfather of Edward and Richard, whose marriage of Anne Mortimer, granddaughter of the second son, bumped them up the pedigree.

Crawford's idea, then, is an excellent one - as the subtitle says, "The History of a Dynasty". The trouble is, the lack of information persists. Albeit the Yorkists were the first thoroughly English kings since 1066, they still tended to operate in medieval French. It remains next to impossible to keep track of all the subsets of Nevilles and Woodvilles and Beauforts. I can just about manage the first two, having done a lot of research myself, but the Beauforts... Crawford, so far as I can tell, has a total grasp of all three, and she provides several family trees to help the fuddled reader get back on track.

Another problem is that these are the last royals without contemporary portraiture. It is hard to empathise with a king or queen you can't really picture. There are contemporary descriptions, and Crawford quotes from most of the best sources. But she gives herself a problem, unnecessary in my view, by avoiding the deformity question with Richard III. When you reach the end without a mention, you feel cheated. Of course Crawford was writing in 2007, before the body was found, so she couldn't see the wickedly curved spine which had be agonising and embarrassing for the king; it had, basically, to be a major factor in his personality and mindset; it is a sign of true character that none of the people who met him, and were not subject to him in any way (I'm thinking of Commines), even noticed a problem.

Crawford's target audience, before the discovery of the body, would have been the Ricardians, those who believe their hero was the innocent victim of Tudor propagandists. The problem is, the Ricardians were wrong about everything. He really was, literally, a hunchback, and every commentator writing during his lifetime and shortly thereafter, none of whom were writing for publication, expressly said he was responsible for murdering his nephews, the Princes in the Tower.

Nevertheless, a great read. Crawford handles the complexities of the period very well indeed and has added a lot of new information about the women who played a key, often behind-the-scenes role in sorting out the royal succession. It is a good idea to end her account with the death of Elizabeth of York, Henry VII's queen, because her son united the warring houses.
Posted by rogerwood at 14:16