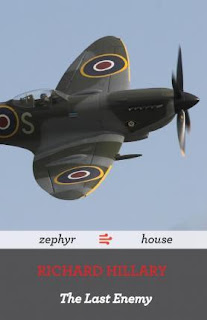 Hillary was born in 1919, an Australian brought up and educated in Britain. He joined the RAF on the outbreak of war, shot down five enemy aircraft and then, on his fifth mission, was blown out of the sky over the Channel by a Messerschmitt.


The canopy of his Spitfire was faulty and he couldn't bail out as quickly as he should. His hands and face were badly burnt before, ultimately, the plane rolled and he fell out of the cockpit into the water. He was rescued by the local lifeboat and taken to a series of hospitals, ending up in the care of pioneering plastic surgeon Archibald McIndoe.


That's as far as Hillary takes us in this memoir, written in 1942. He goes into no detail of how bad his disfigurement was and this slightly crappy edition provides no preface or introduction to tell us what happened to him in later life.


Considering the book itself, Hillary starts with his shooting down. He then backtracks to his idle days at Oxford and enlistment, with his varsity pals, in the RAF. He describes training in Scotland and the long wait to achieve a Spitfire posting. It gets a bit dull, to be frank. However the second section, in hospital, turns out to be surprisingly effective. Hillary finds an engaging tone somewhere between modesty and extreme heroism (which, modestly, he focuses on the other patients, all of them burnt airmen). There is no real end, presumably because he was still receiving treatment when he wrote the book.


This is where a capable introduction or appendix would have come in handy. Hillary certainly was receiving treatment, from another specialist, in 1942. His disfigurement was so bad that Lord Halifax had refused to let Hillary be seen on a propaganda tour. Naturally this was a massive blow to a young airman full of testosterone and it seems he lost confidence. Hence he was taken to New York - to the Ritz Towers Hotel, where legendary Anglo-Indian actress Merle Oberon is said to have administered two weeks of specialist reassurance. Soon Hillary had blagged a return to flying, even though his hands were so maimed that he couldn't handle a knife and fork. He crashed his light bomber in January 1943. He was still only 23 years old.
Posted by rogerwood at 14:48