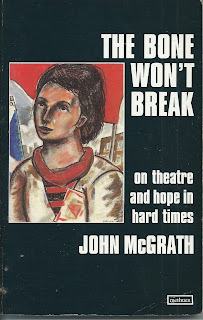 The Bone Won't Break is the text of lectures given by McGrath at Cambridge University in 1988. A similar series of lectures, from 1979, had been turned into A Good Night Out.


The latter told the story of how McGrath, a successful television screenwriter and author of one stage success, Events While Guarding the Bofors Gun, which Jack Gold turned into a 1968 movie starring Nicol Williamson and John Thaw, had founded - with like-minded collaborators - the 7:84 touring theatre company in 1971. The name comes from the statistic that 7% of the population controlled 84% of the wealth. Now, of course, the first number is smaller, the second higher.


In the good days of Heath and Wilson, 7:84 received funding from the Arts Council. Its biggest success was McGrath's play The Cheviot, The Stag and the Black, Black Oil. This was theatre of dissent, left wing agit-prop, which 7:84 took to the communities involved in the halcyon days of North Sea Oil.


By 1979 7:84 was two companies, an English and a Scottish one. McGrath was English (born in Merseyside) but was a Scotsman by marriage, deeply involved in the early days of the devolution campaign. McGrath was a totem of the awkward squad - which was what, in those days, the Arts Council existed to fund.


The Bone Won't Break describes the Thatcher years, in which the purpose of art was quite deliberately subverted in order to squash voices of dissent. Instead of sponsoring alternative forms of theatre, funding under the horrendous reactionary prig Lord Mogg (father of Jacob) went to centres of excellence like the RSC, the National Theatre, and above all else, Covent Garden. Nobody complained. Everybody loves classical theatre. Don't they?


English 7:84 lost its grant and died in 1984. The Scottish version stumbled on until 2008 with residual funding from the Scottish Arts Council. I'm sure it did good work but the fact is it was something of a fossil, a reminder of earlier, better days.


And here I agree absolutely with McGrath. Theatre in the Seventies, when I did my first degree in drama and worked in the profession, was vibrant, challenging and multiform. Every voice, from cut-glass to Glasgow growl, found an outlet. Audiences had choice. Performers cultivated them. Now, it's all ghastly musicals. Outside Edinburgh in August there are no fringe spaces. Culture has lost. Thatcher and her uncultured goons killed it. Now grime music is Britain's last remaining voice of dissent, sometimes for as long as couple of months before the music industry buys the rights and sanitises the product.


Theatre Studies now is all about musicals and dance. Musicals are a mongrel form, very few of which achieve real success. Dance is an incredibly hard discipline. It can sometimes be radical but hardly ever political. Protest theatre will never conquer the West End, nor should it try. Its place is the small venue, the country field, the car park, the public space every city is now creating where its markets used to be.
Posted by rogerwood at 14:52