Out of the Silent Planet - C S Lewis

Lewis's Cosmic Trilogy, of which this is the first, preceded his Narnia books by more than a decade and, indeed, an entire world war. Out of the Silent Planet (1938) was only his second novel, yet the authorial voice is fully fledged, immediately recognisable as the voice of Narnia. In many ways it is Narnia for adults, or slightly older youngsters. The creatures of Malacandria or Mars are varied but still essentially 'human' and there is a strong moral framework underpinning the work. 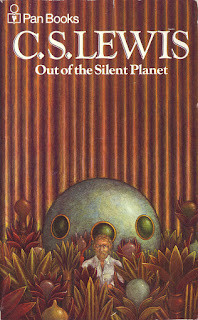 Elwin Ransom is a philology don on a walking holiday. He stumbles into a business operated by Devine, an acquaintance from school, and Professor Weston, the noted physicist. They have invented a space capsule that works "by exploiting the less observed properties of solar radiation". Ransom is drugged and wakes to find himself aboard the ship, bound for a planet of which he has never heard. Devine and Weston have been there before and have agreed to supply the natives with a specimen of humankind.


The first natives encountered are gigantic sorns. Ransom makes a break for it and finds himself among the hrossa, a sort of seal people who specialise in singing and poetry. As a linguist, Ransom is soon able to talk with them and lives happily with them until a creature no more than a flash of light, an eldil, reminds the hrossa that Oyarsa is expecting him. A sorn called Augray helps Ransom to get to Oyarsa, and it transpires that all the higher orders of being or hnau that inhabit Malacandria co-exist peaceably. Oyarsa is the supreme eldil, the overseer of Malacandria. They are others like him on all the planets of the solar system, even Earth. Earth is called the Silent Planet because its version of Oyarsa is 'bent' - fallen, malignant - hence the creatures of Earth do not co-exist but perpetually struggle for dominance.


The moral and religious element is therefore clear. Malacandria and Earth are both dying planets. The essential scheme of the villains Devine and Weston is to open colonisation of other worlds as a refuge for mankind when disaster strikes. The Malacandrians have no such concerns. They accept death as part of the cycle. In the past other lifeforms have prospered on Malacandria; the roseate clumps which Ransom initially took for clouds are in fact the fossilised remnants of a previous world dominated by creatures of the air, just as Earth was once a world of giant lizards.


The story is startlingly profound, very different from the general run of science fiction. Continuing into the second part of the trilogy, Voyage to Venus aka Perelandra, seems inevitable.
Posted by rogerwood at 15:16