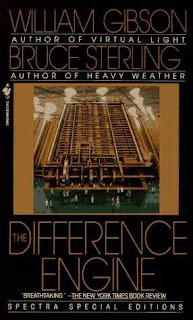 What we have here is a collaboration between two founding fathers of cyberpunk, an alternate history in which Babbage's proto-computer has changed the world, notably Britain. The Tories under the Duke of Wellington tried to hold off the Radicals until Wellington was assassinated and the Rads took over. Byron is Prime Minister, his daughter Ada is effectively First Lady, and the House of Lords has become an appointed senate of savants. Steam carriages prowl the streets and the greatest, most popular form of communication is by way of punched cards. Vast bodies of data are stored and minutely analysed. The Victorians of 1855-56 even have their own version of fake news - eye-catching headlines on big screens with no real fact or analysis behind them. Which is pretty damn impressive for a book published in 1991.


It fascinated me. I loved the game of style played by the authors in which we have a series of five more or less standalone 'iterations' and conclude with a 'modus' of pseudo documents. We have a series of protagonists who come and go, some taking up more space than others. We have the Rad prostitute Sybil Gerard, who becomes involved with the speaking tour of ousted 'Texian' president Sam Houston; then there is Edward Mallory, discoverer of the Wisconsin Brontosaurus. He falls in with Laurence Oliphant, a sort of effete James Bond with connections in the very highest circles in Britain, the US and, for some reason, Japan.


These are fascinating characters. The world they inhabit is vividly realised down to the tiniest detail. The warnings to the modern reader are manifold. The problem is, though, I haven't the faintest idea what the book was about. What is its theme? What exactly are our heroes trying to achieve? And what do they actually achieve?


I'm not at all sure these things actually matter. They didn't in any way spoil my enjoyment. I suppose in a way there's a similarity to Murakami's 1Q84. Essentially, this is the world I have created for you; this is what these people do in it; make of that what you will.