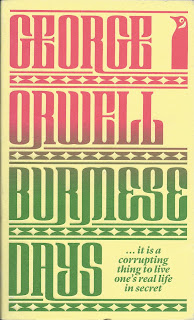 Burmese Days was Orwell's debut novel in 1934. It is however set in 1926 and, like many first novels, is heavily autobiographical. Orwell was resident in Burma, then part of the greater British Empire of India, until 1927. He was a member of the Imperial Indian Police, unlike his counterpart in the book John Florey, who works for a timber firm. Orwell's stay was terminated by a bout of dengue fever; Florey, without giving anything away, finds another way out.


Obviously, I have read Animal Farm more than once. I have recently read key works of non-fiction - Down and Out in Paris and London and The Road to Wigan Pier. None of these prepared me for the skill and immersive storytelling of Burmese Days.


Florey is a peripheral member of the ex-pat community in this up-country maidan. He keeps a Burmese mistress and is on friendly terms with the local Indian doctor. Life for the Europeans centres on their club. It is not much of a bulwark against the natives - they can't even guarantee ice for their gin - but it is all they have. When notice comes from Delhi that they should consider admitting at least one local to their club, sparks fly. Similarly, the corrupt local magistrate O Po Kyin begins to plot against Dr Veraswami, his only serious rival for the honour.


The routine of ages is further disrupted when the Lackersteens' niece Elizabeth arrives from England. Elizabeth is very modern with her cropped hair, but insufferably old-fashioned regarding her mission in life. Her mission is marry a suitable man. To return from Burma without a husband would be unthinkable. There is not much choice in Kyauktada; Florey perhaps, albeit he has socialist leanings, a disfiguring birth mark on his face and talks too much; or the dashing young policeman, Verrall, who talks hardly at all, loves Polo and bears the title The Honourable.


All narrative strands are pleasingly resolved, by no means all in foreseeable ways. There is much comedy, smart, authentic-sounding dialogue, and the occasional laugh-out-loud comedy. The characters are brilliantly drawn and Orwell takes us inside their heads to reveal the beliefs and attitudes they would never dream of voicing.


I was hugely impressed.
Posted by rogerwood at 14:58