Everybody knows it - but how many have actually read it? Not as many as one might think, is my guess. I certainly read lots of Sherlock Holmes in my early teens but even after fifty years I'm sure I would have remembered this. Why? Because nearly half of it is actually a cowboy story! 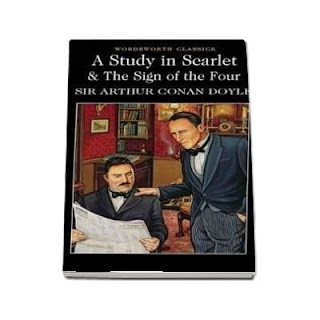 To be clear, I have always thought Conan Doyle is overrated - a moderately capable writer who, from time to time, and not only in the Holmes genre - hit upon really compelling storylines and great characters. None of that applies to A Study in Scarlet. Part One, the Holmes origin and initial investigation as we would expect it, is actually extremely well done, the writing considerably better than in later works. The second part, the cowboy stuff, is guff beyond belief, filler in every sense of the term.


The reverse thinking, the famous analytic deduction, I found as unconvincing as ever. Holmes just proposes something outlandish and Conan Doyle works backwards to justify it. But it works as well here as it ever did later on in the canon. And there are many things I didn't realise would be present in the first episode. We have both Scotland Yard inspectors, Lestrade and Gregson, for example. The Baker Street Irregulars are up and running. Mrs Hudson doesn't have a name yet, but she does have a maid and a dying dog. I was under the impression that Watson had to leave the army because of a leg wound from Afghanistan but it transpires it's a shoulder wound and a bout of enteric fever contracted in hospital.


As for the title - again, everyone knows it, but who can explain it? Well, Holmes does to a certain extent: "There's the scarlet thread of murder running through the colourless skein of life and it is our duty to unravel it." Well, no there isn't. Other than that, your guess is as good as mine.


In short then (and one of the best aspects is that A Study in Scarlet is only really a novella), reading the first Holmes story was something I should have done fifty years ago. Reading it now was fascinating and, even allowing for the cowboy romance, it turned out to be much better than expected. Yes, I enjoyed it.
Posted by rogerwood at 15:13