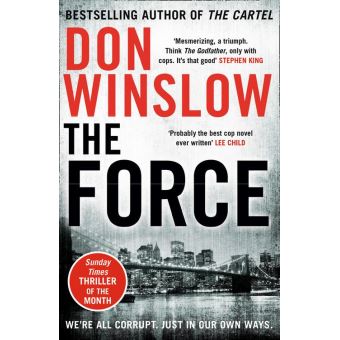 Been waiting months for this, Winslow's latest, soon to be a major TV series, to come out in paperback. The moment I hear it's in the shops I'm off to Waterstones to snap up my copy. Started reading it that same night.


For anyone who saw The Shield or read Joe Wambaugh's Choirboys back in the Seventies, there's nothing new here. In fact, the situation is slightly worse than that. The storyline in The Force is virtually identical to that of The Shield. The behaviour of the NYPD is no worse in 2017 than it was in the Wambaugh more than forty years earlier. Indeed, Wambaugh's cops were better drawn and I cared more about their fate.


For those, like me, who have read Winslow's Power of the Dog, The Cartel and - best of all - Savages, The Force comes as a massive let down. In those earlier novels Winslow had staked out a territory all his own, with multiple intersecting storylines and deep background. This is New York, ground well and truly trodden, and reads more like a TV novelisation than original fiction. In fact, were Winslow an unknown, I doubt it would ever get accepted for TV because the male anti-hero is a walking-talking stereotype and there is no strong woman to counter him. This latter point is a criminal shame because the other Winslow books I mentioned are packed with interesting women.


It is not badly written - Winslow couldn't write badly if he tried - but compare it with Savages, where even the layout of the words on the page fizzes with invention, and it's pretty stodgy stuff. I liked the character of Monty and I liked Malone's snitch Nasty Ass. Other than that I didn't give two hoots about any of them, especially Malone which, when you've spent 480 pages seeing the world entirely from his point of view, is a frankly damning indictment.
Posted by rogerwood at 17:46