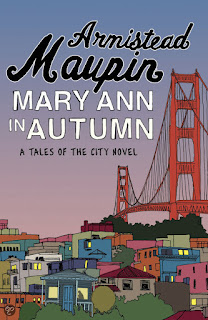 Mary Ann in Autumn is the eighth instalment of Maupin's magnificent Tales of the City, but only the second novel. The first was effectively a collection of his newspaper column and the next five stuck to that format. Then came Michael Tolliver Lives (2007), the first novel, which is also reviewed on this blog. Then comes Mary Ann in Autumn. The good/bad news is that there is a third novel, The Days of Anna Madrigal (2014) which we have to presume is the end.


The best news, though, is that Mary Ann is as good as anything earlier in the series, which means it is superlatively good. Maupin's great gift is that he tackles all the daily problems of San Francisco's gay and trans communities over a period of forty-plus years and he does it with love, compassion and a deep understanding of the human condition. A lesser artist would make it all about sex, perhaps with some exploration of the consequences of coming out. Maupin's characters are already out when we first meet them. We can take their sexual orientation or body dysmorphia as read.


Mary Ann, the great prude of 1978, returns to San Francisco having seen her husband and her life coach enjoying oral sex via Skype. The timing could have been better - she's also just found she has ovarian cancer. In coming to terms with the possibility of death, she in fact comes to terms with the endless possibilities of life. She is hosted by Michael and his husband Ben, supported by Dee Dee and her wife D'or, and inspired by the increasingly frail Anna Madrigal. Anna is now living with Michael's assistant Jake, who is transitioning to male. There is much awkwardness when he meets a Mormon Missionary who has gay leanings. There is also a secondary storyline involving Mary Ann's estranged daughter Shawna and a gangrenous beggar who turns out to have links to Mary Ann herself.


It is all brilliantly and (on the face of it) effortlessly done. The effortlessness is only skin deep. Maupin has spent a lifetime exploring these much-loved characters. He knows their every tic, hang-up and memory. He takes the same amount of care with characters who only appear (or reappear) in this novel. Even the worst of them has a soul and even the dogs have characters.